Mswane, 24, from KwaZulu-Natal walked away with the Miss SA 2021 title on Saturday at the Grand Arena, Grand West in Cape Town.

The two runners-up were Moratwe Masima from Gauteng and Zimi Mabunzi from Eastern Cape. 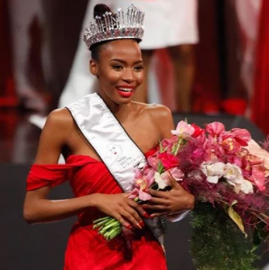 Mswane, who is a model and dancer, holds a Bachelor of Law qualification from the University of Pretoria.

Mthethwa wished Mswane all the best in her reign as Miss South Africa.

“We trust that she will represent the country very well. She certainly embodies the leadership qualities that are key to making an impact in the world as an ambassador of this country,” Mthethwa said

Lalela Mswane: Is from KwaSokhulu, Richards Bay in KwaZulu-Natal, is a model and dancer and has a Bachelor of Law degree from the University of Pretoria. She describes herself as graceful, tenacious and meticulous and says she would love to meet the Minister of Employment and Labour, Thulas Nxesi, to discuss ways of alleviating the growing unemployment problem.