How to Check Majina ya waliochaguliwa Sensa 2022 PDF

Majina ya waliochaguliwa Sensa 2022 PDF, www.ajira.nbs.go.tz.  The Government of the United Republic of Tanzania plans to conduct a Population and Housing Census by August 2022. The Ministry of Finance and Planning through the National Bureau of Statistics (NBS) in collaboration with the Office of the Chief Statistician of Zanzibar (OCGS), is in the process of preparing to conduct the Census. Majina ya sensa 2022, Six hundred thousand people applied for jobs in the 2022 population and housing census. Census Commissioner Anna Makinda said the number of applicants who applied for jobs for the census exercise was 674,484 people who applied.

Census Pro Commissioner Anna Makinda said after the names were announced, the next step is to Interview those who will be selected for the exercise.

How to get Majina ya waliochaguliwa Sensa

The names of those selected for census employment will be announced by the National Bureau of Statistics (NBS) through the Media and also through the PMO-RALG and NBS website.

All applicants will be able to determine whether or not they have been nominated when the NBS announces the names.

The names will be available at www.ajira.nbs.go.tz

Importance of Population and Housing Census 2022 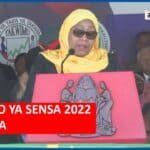